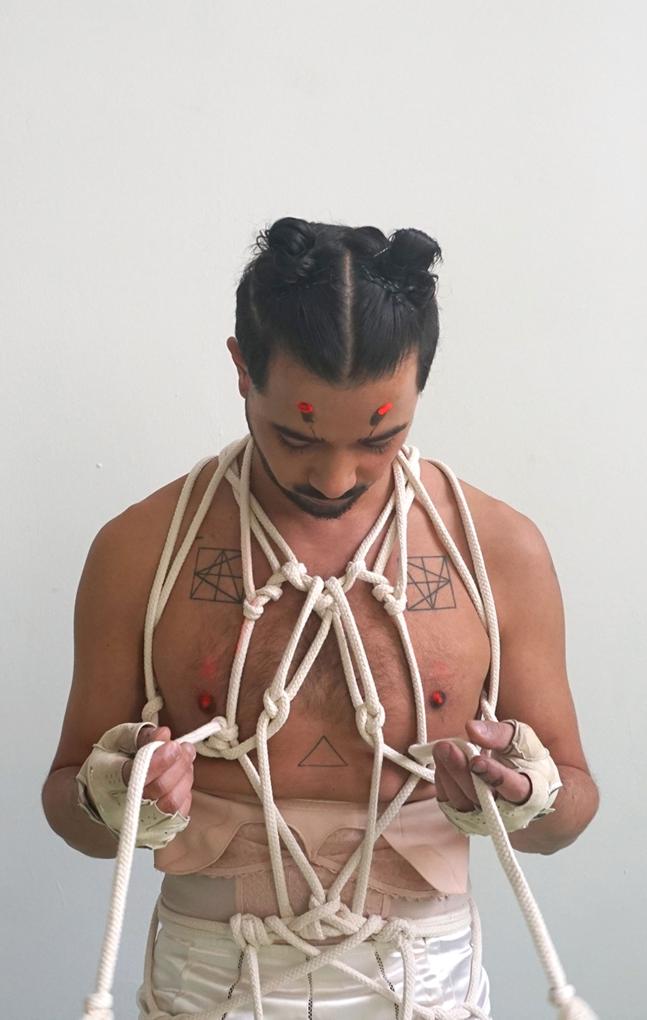 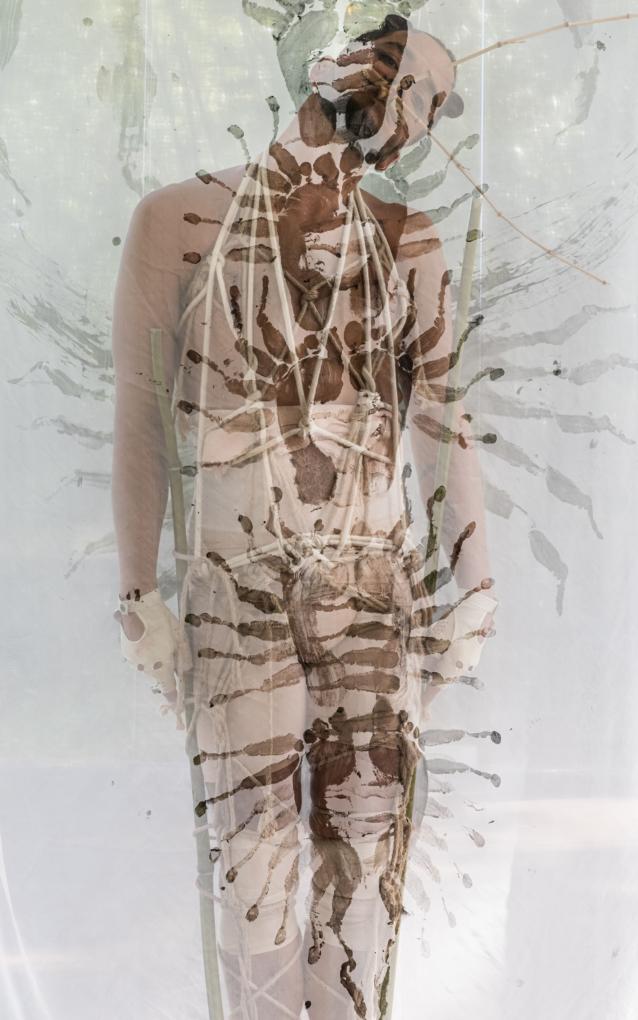 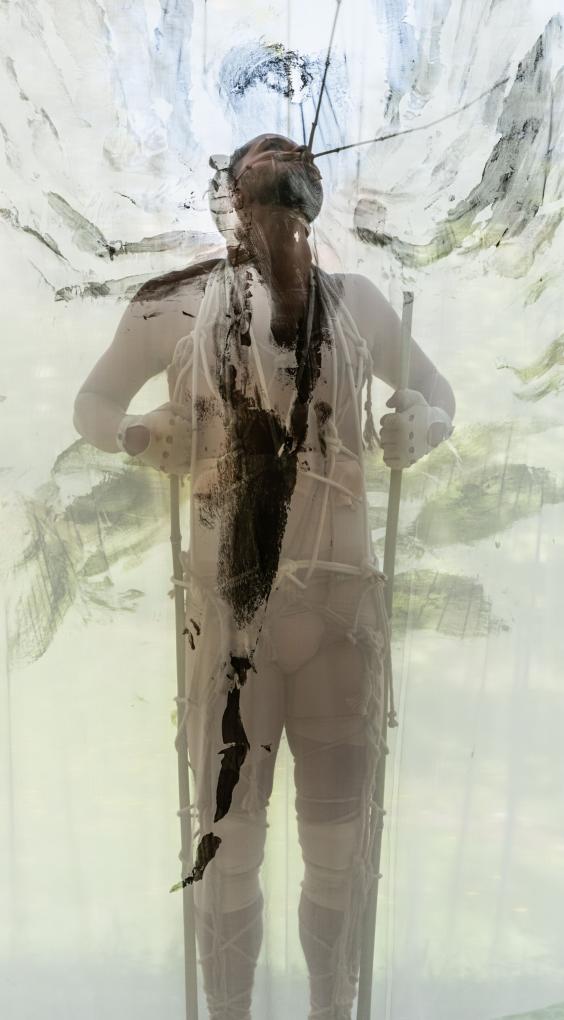 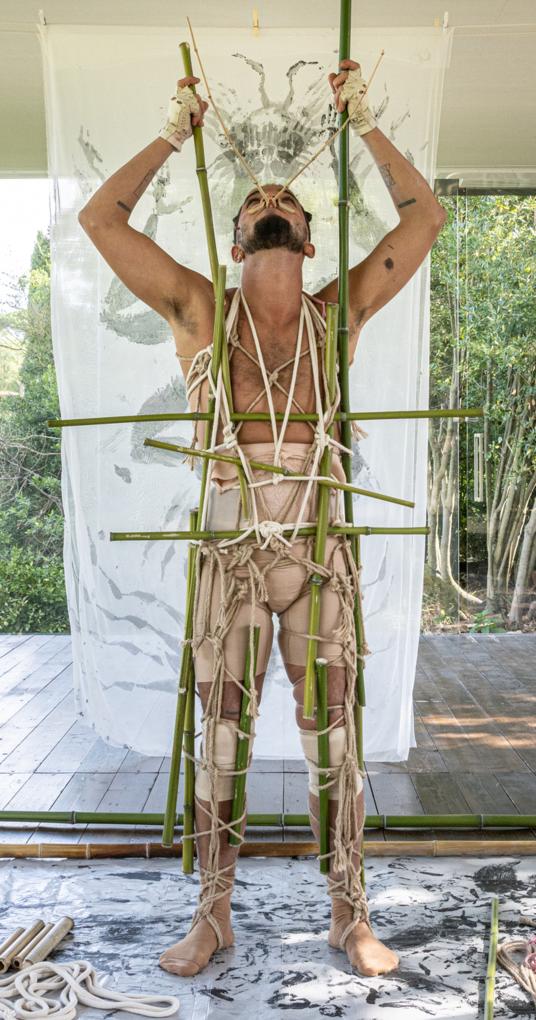 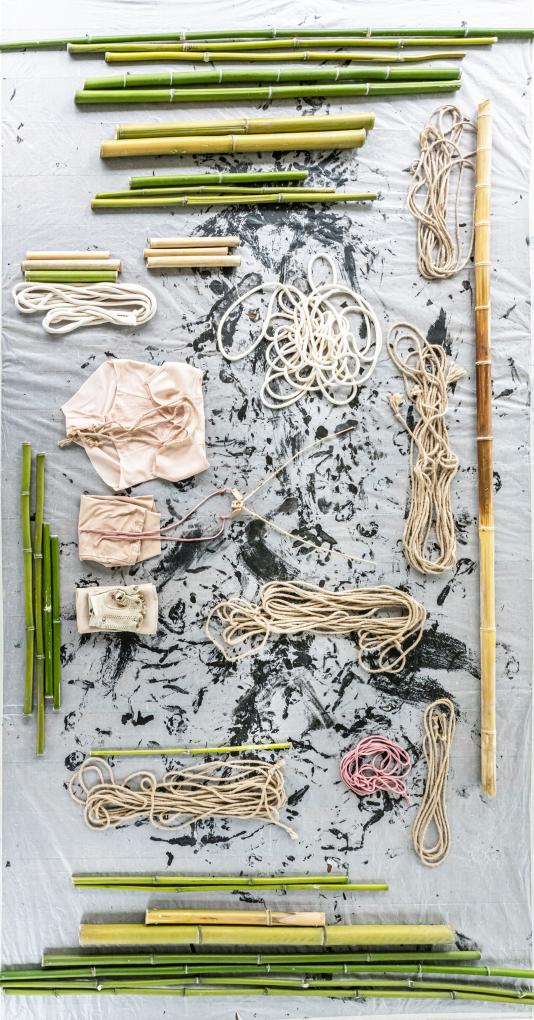 The focus of Insectopia is the artist's own body, through which he records the experience of dehumanization based on his Roma and queer identity.

In a famous passage in Sister Outsider, African-American feminist poet, author and activist Audre Lorde recalls her childhood experience of racist treatment by a member of the majority. When a white woman disgustedly walks away from her on a New York subway, Lorde surmises that the cause of the middle-class lady's disgust must be an insect - probably a cockroach - crawling between them on the seat. Only then does it dawn on the shocked child that she is the insect.

The artist's body, tied with ropes and supplemented with bamboo sticks, resembles an enlarged insect in an entomological collection or an exhibit in an anthropological museum. This tension between the human and the inhuman is heightened in a series of prints on silk made with the use of parts of the artist's body, such as hands, fingers, ears and genitals, and in a series of physical actions in which Gabris explores "inhuman gestures" with the aid of insect-like props. In Insectopia, Gabris combines all these components into a narrative of dual marginalization: the experience of a member of a sexual minority group and an ethnic group rejected by a considerable part of the majority. At the same time, however, the artist transforms this position into a gesture of resistance to the dehumanizing racist and homophobic stances. He perceives his body as changeable and fluid, and be means of this fluidity he resists the taxonomic hierarchies assigned to him in a system based on prejudice.

Robert Gabris says the following about the emancipatory potential of his gesture: “I draw the state of being rejected as an object of disgust. On the other hand, there is also an element of glory in the fact that it is always associated with the fear of non-humanity. I don't emigrate, I don't assimilate, I don't integrate. If you want to identify my fingerprints, you have to go through my Insectopia.”

Robert Gabris was born in 1986 in Hnúst, Slovakia. After his bachelor's degree in scenography at the Academy of Performing Arts in Bratislava, he studied at the Academy of Fine Arts in Vienna. In his work, which moves between conceptual drawing, installation and video, he often thematizes the intersections of marginalized identities. Gabris has exhibited in collective and solo exhibitions in Shanghai, Bangkok and Riga, among others. Czech audiences have encountered his work at the Matter of Art Biennial (2020 and 2022), the Artivist Lab Gallery (2019), and the Moravian Gallery in Brno (2017). In 2021, Gabris won the Chalupecký Prize with his installation Error.