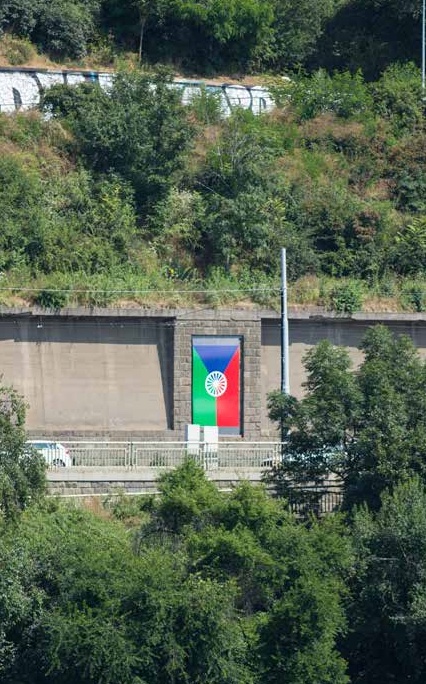 Project Artwall aims to support social impact of contemporary art in a non-gallery environment. This goal is based on the nature of the gallery's dominant location, which ensures effective communication with the public. Artwall Gallery consists of eight monumental niches in the supporting wall along Vltava river. Program of Artwall Galery is thematically focused on art dealing with social and political questions.

Thanks to its open public placement, the Artwall gallery has a democratic character: it is open twenty-four hours a day and freely accessible to all. Due to the number of drivers and passengers who daily pass through the embankment, Artwall is one of the most visited Czech galleries. Artwall is not only about the exhibitions themselves, however. The current program has also been accompanied by events. A broad scale of people have contributed to the program: human rights and ecological activists, homeless people and people from other disadvantaged groups, representatives of local government, etc. Exhibiting were local as well as international artists, artists world renowned as well as art students, professionals as well as people without any formal art education. The program fulfills a vision that art can connect people and provide a space for mutual dialogue.

Artwall gallery is part of the Czech network of feminist art institutions: http://feministinstitution.org/code-of-practice/.

The Artwall Gallery was inspired by an American artist Barbara Benish, who at the end of the 90s came up with the idea to use the space on the Letná wall for contemporary art. The wall, which originally served as a space for communist propaganda, remained empty after the fall of the regime. In 2000 Benish finally revived the abandoned wall with her project “Flower Power” supported by the Centre for Contemporary Arts Prague.

Benish’s project created a great wave of interest among Czech artists. Many of them wanted to present their art in this public way. It was not until 2005 when David Walliker, another foreign artist living in Prague, managed to gather the necessary funds for the implementation of the idea. It was in 2005 that Artwall Gallery, under the organizational management of the Centre for Contemporary Arts Prague, started its regular operation. The curator of the project in this period was Ludvík Hlaváček.

Between 2005-2008 the Artwall Gallery presented 15 exhibitions of both Czech and foreign artists, among them: Lenka Klodová, Mirella Bentivoglio, Martin Zet; and the groups Pode Bal and Guma Guar. It was the "Collective Identity" project by Guma Guar in 2008 that led the City of Prague Municipality, the official owner of Letná wall, to withdraw from the leasing contract and this way to close the entire gallery down. “Collective Identity” was a visual satire criticizing the municipal advertising campaign for organizing the olympic games in Prague. Closing of the Artwall gallery became an example of politically motivated censorship of art since 1989.

In 2011, after tree years of struggle to reopen the gallery, Artwall was brought back to life after changes in the City of Prague Municipality management. Markéta Dolejšová, Petr Motyčka and Zuzana Štefková took over the gallery’s curating. In 2013, Lenka Kukurová became a member of the team and she and Zuzana Štefková are responsible for the current program. The gallery is managed by c2c Circle of curators and critics.

The gallery’s activities were symbolically renewed in 2011 with the exhibition of the Russian group Voina, whose members were under persecution at the time for their activities aimed against Putin’s regime. This exhibition began the gallery’s thematic focus on social and political questions that often arouse public discussion.

Since 2017, only six of the eight frames are used by the gallery due to a legal dispute between the City Hall and a construction firm responsible for the reconstruction of the retaining wall.