Fair Sex, the second exhibition organized by the Hermitage Gallery, brings together a representative selection of works by Anetta Mona Chisa (*1975 in Romania) and Lucia Tkáčová (*1977 in Slovakia). The two artists have worked together since 2000, commenting on the issues of gender, embodiment, and ideologies. The theme of their current exhibition revolves around the ideas of stereotypical womanliness and the sexualized representation of the female body. With the use of irony and humor the authors play with the visual signifiers of pornography, explore spiritual aspects of dieting and tackle the ties between gender, power and geography.

Porn Photo-series (2004-2005) mime the style, poses and general appearance of the mainstream pornography but for one difference: the protagonists, represented by the artists themselves, are fully clothed thus parodying the mechanisms of seduction. In the video Dialectic of Subjection #4 (2006) we see the artists commenting frivolously on the looks of various politicians disregarding their moral qualities or political power. The intimate girlie chat, full of tongue-in-cheek humor portrays the global leaders as sexual objects subjected to the
whim of the artists, while underscoring their actual powerlessness. I'm going to Change My Life (2006) started as a site-specific project originally installed in form of billboards in Margate, England. The work focused on immigrant women from eastern Europe living and working in UK. Together with another work from the same period entitled 10 tips for Eastern European Women Artist on how to make it big in the West (2006) these two texts capitalize on clichés regarding the eastern European femininity. East meets West as devote folk Catholicism fuses with contemporary dieting in the video Halleluiah Diet (2007). The work portrays an old Slovak lady explaining the principles of a holy diet. By revealing its relationship to Christianity, the artists want to get to the bottom of body obsession in the contemporary culture.

The Hermitage Gallery is a non-profit apartment gallery specialized in presentation of works by Czech and Central European artists. It was established in the cooperation with c2c Circle of Curators and Critics, Prague. 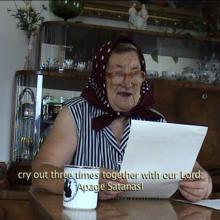 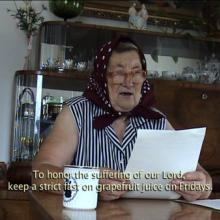 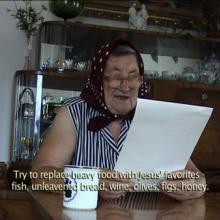