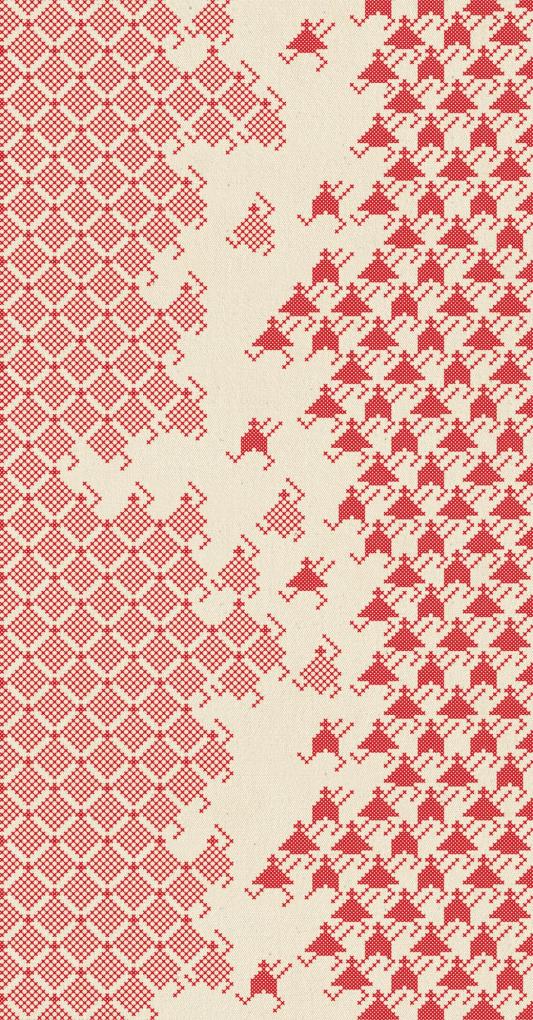 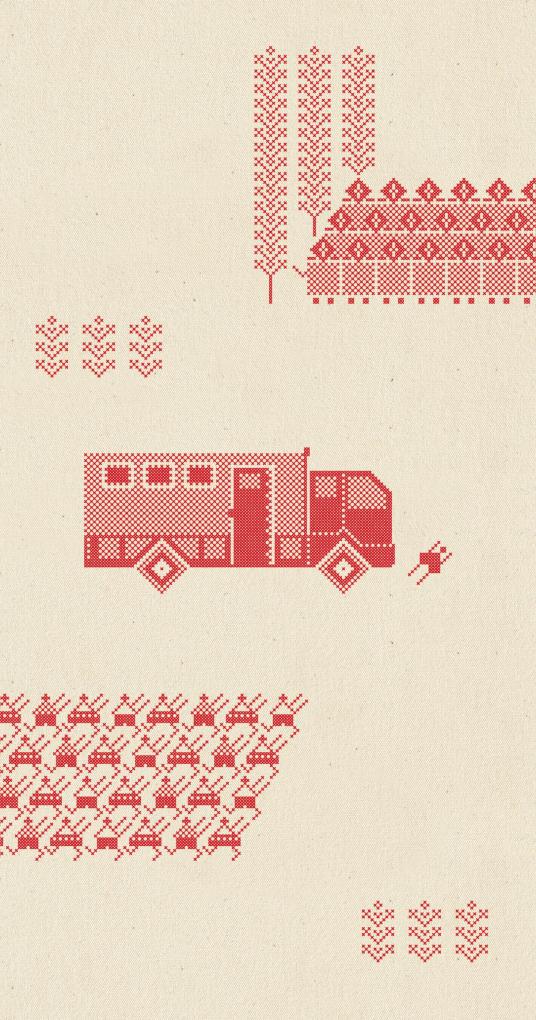 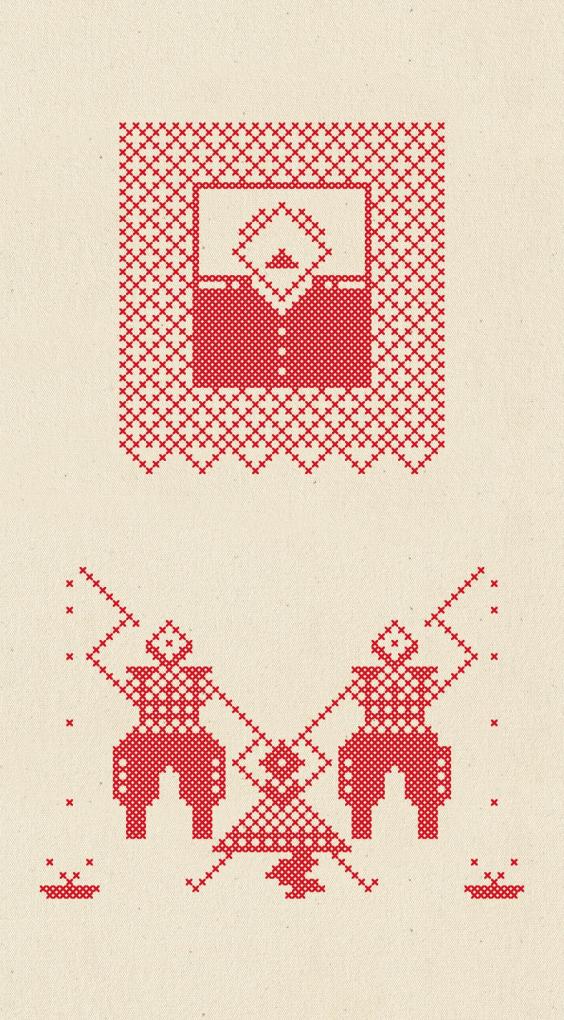 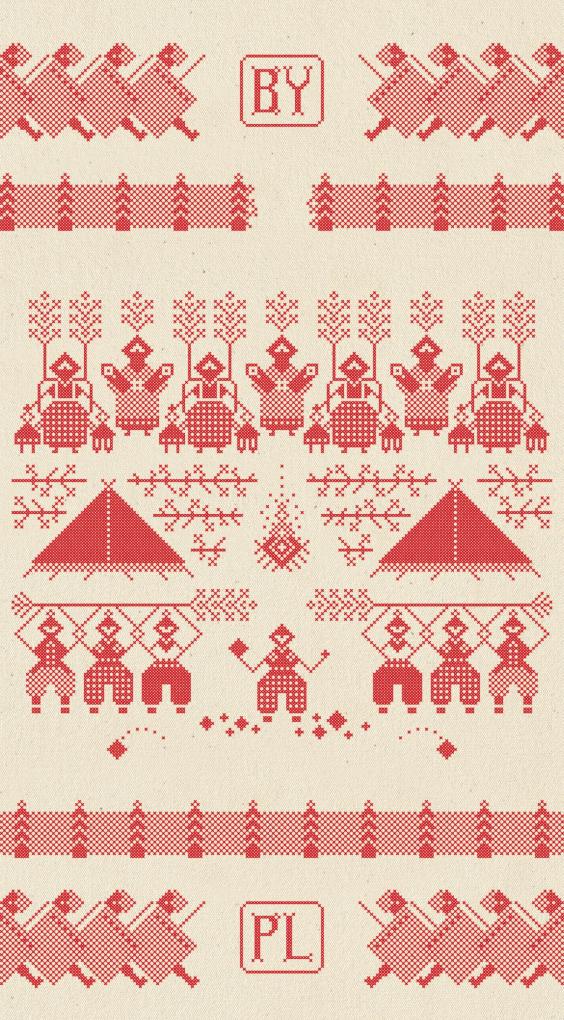 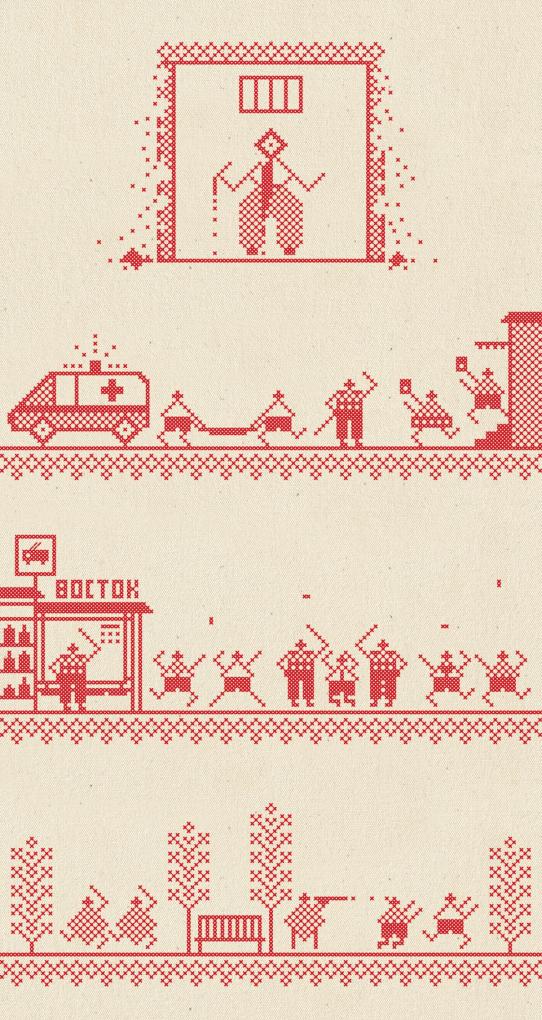 Rufina Bazlova's exhibition Belarusian Folklore captures the alarming situation in contemporary Belarus. It recalls the mass protests after the rigged elections in 2020 and their brutal suppression; the beatings, torture and imprisonment of opponents of the Lukashenko regime, but also more recent events such as the humanitarian crisis on the Belarusian-Polish border fueled by Lukashenko.

Rufina Bazlova's stylized images, which the artist began creating in the summer of 2020 in response to state brutality, quickly began circulating online and were seen by hundreds of demonstrators as symbols of resistance and democratic revolution in Belarus. The images are created in the style of "vyshyvanka" – traditional embroidery with red thread on a light linen background. The white colour in the embroidery symbolises purity, light and freedom, while red is a symbol of life, blood, sun and goodness. The embroidery represented a specific code for detailing information about the life of a nation or a particular person wearing the embroidery. Rufina Bazlova continues this tradition and tells stories of injustice and human suffering, but also of the unrelenting Belarusian struggle for freedom

The artist deliberately works with folk art techniques traditionally associated with women's work. Women also play an important role in the resistance against the dictatorship, whether it is the leader of the democratic opposition Sviatlana Tsikhanouskaya, the musician Maria Kalesnikava, or the human rights activist Marfa Rabkova and thousands of other women, who – often in white dresses and holding flowers – have fearlessly confronted riot police, protested against human rights abuses, and are now in forced exile, serving long sentences for trumped-up crimes, or living under the constant threat of persecution.

"The more we talk about political prisoners, the safer they are," says Bazlova, quoting Darja Losik, wife of wrongfully arrested blogger Ihar Losik.

The unprecedented police brutality, including cases of torture, killings and tens of thousands of arbitrary detainees, has sparked a wave of solidarity, as have last year's reports of freezing children on the Belarusian-Polish border, who were cynically used by the Lukashenko's regime to destabilise the European Union. We want to keep this topic alive by means of an exhibition in a public space," proclaim Lenka Kukurová and Zuzana Štefková, curators of Artwall Gallery.

"The human rights crisis in Belarus has been going on for almost a year and a half. The regime is becoming more and more repressive, people detained just for exercising their right to peaceful protest are sentenced to heavy sentences. Unfortunately, our society is slowly getting used to it and we do not see the possibility of change in Belarus. This exhibition can help to spread the word about current events in Belarus and encourage people in the Czech Republic to demand active steps from the government and political representation," concludes Evgenia Bernstein, Campaigns Assistant at Amnesty International Czech Republic.

The opening of the exhibition will take place on February 16th 2022 at 6 pm in the Scout Institute 1/4, Prague 1. The project will take place in cooperation with Amnesty International Czech Republic. During the opening, we will present a petition demanding the immediate release of human rights activists Valjantsin Stefanovic, Uladzimir Labkovic, Nina Labkovic, and Ales Bialjacky. Belarusian musician and activist Aliaksandr Yasinski will play at the opening.

Rufina Bazlova is a Belarusian illustrator, artist and scenographer living in the Czech Republic. She studied illustration at the Ladislav Sutnar Faculty of Fine Arts in Pilsen and scenography at Theatre Faculty of the Academy of Performing Arts in Prague. Her series of embroideries became a symbol of the Belarusian revolution and was subsequently exhibited in the USA, Germany, Poland, the Netherlands, France, Sweden, Canada, Lithuania and Ukraine and presented on the Wetransfer platform. "History of Belarusian Vyzyvanka" (neologism from the word "vyzyvat" = Belarusian for survive) can be found here: https://www.vyzyvanka.com/

The project is being carried out in cooperation with Amnesty International Czech Republic and with the financial support of the Ministry of Culture of the Czech Republic, the City of Prague and the Municipal District of Prague 7.

Photo of the exhibition at Artwall: Martin Micka, photo of the vernisage: Artwall

Report about the exhibition in French in Czech radio: https://francais.radio.cz/rufina-bazlova-les-droits-de-lhomme-en-bielor… 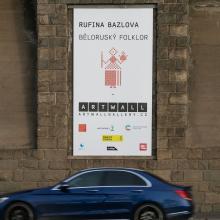 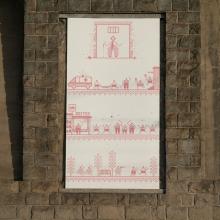 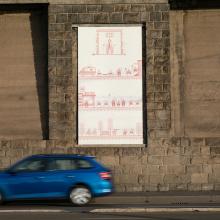 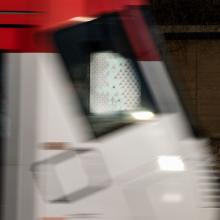 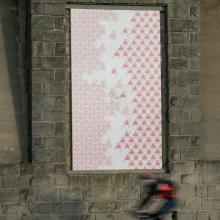 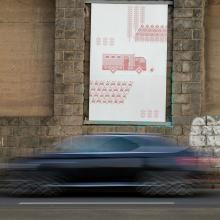 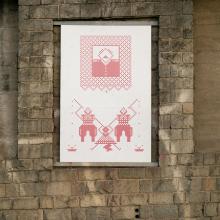 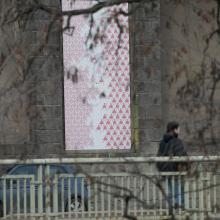 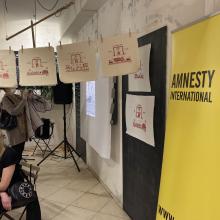 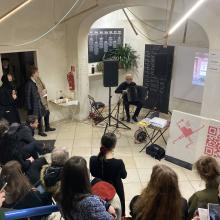 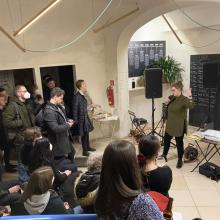 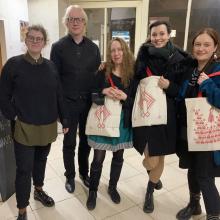