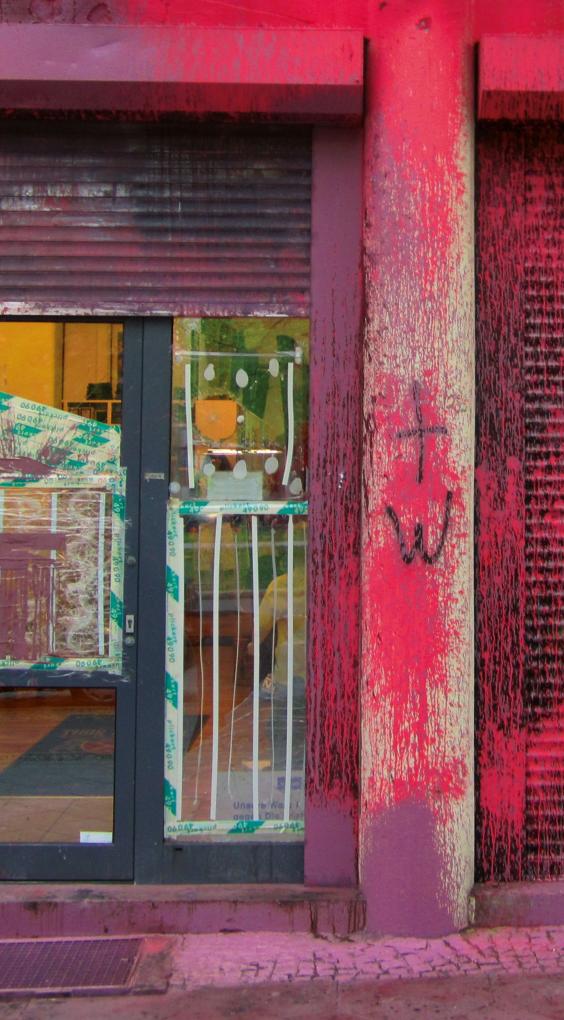 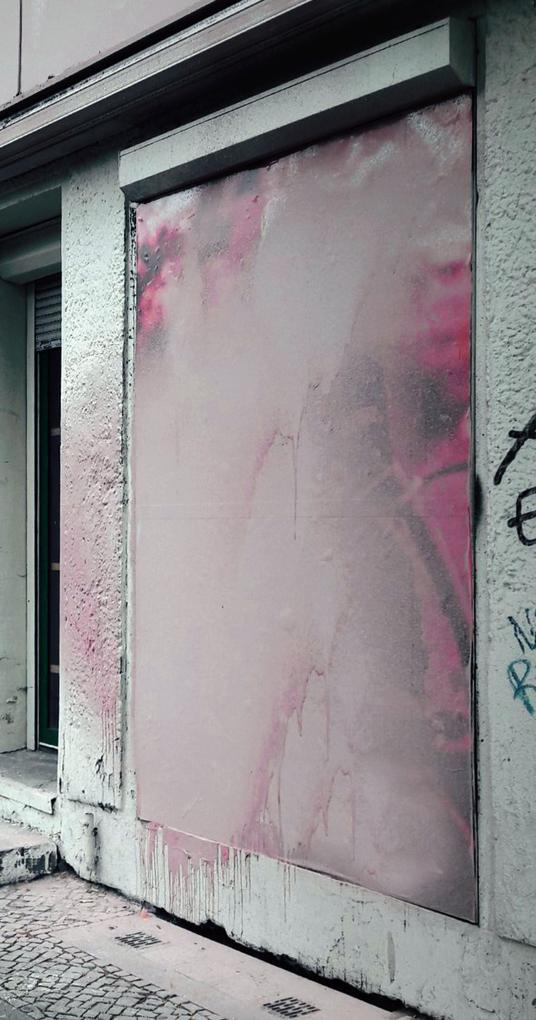 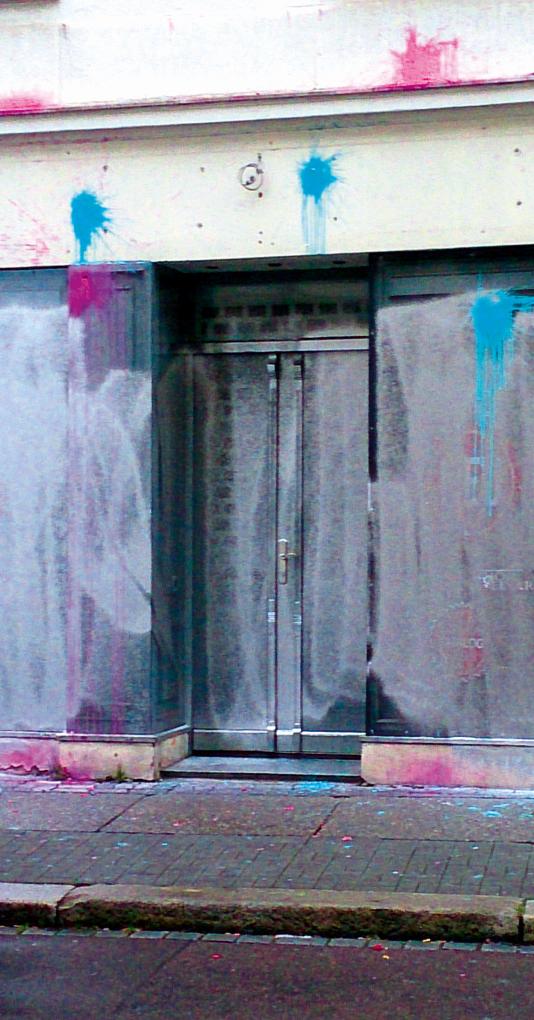 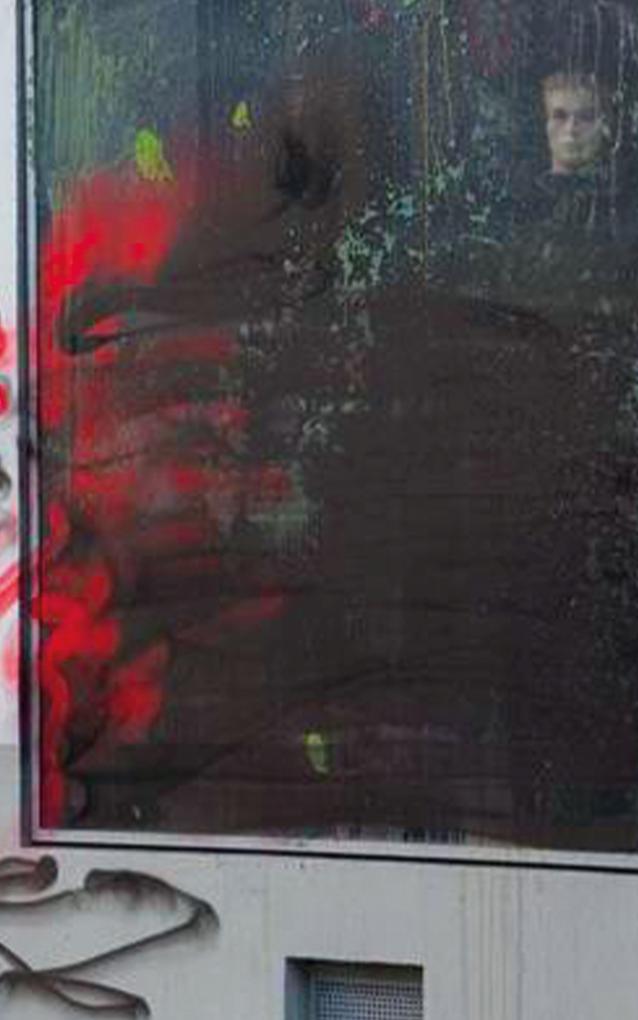 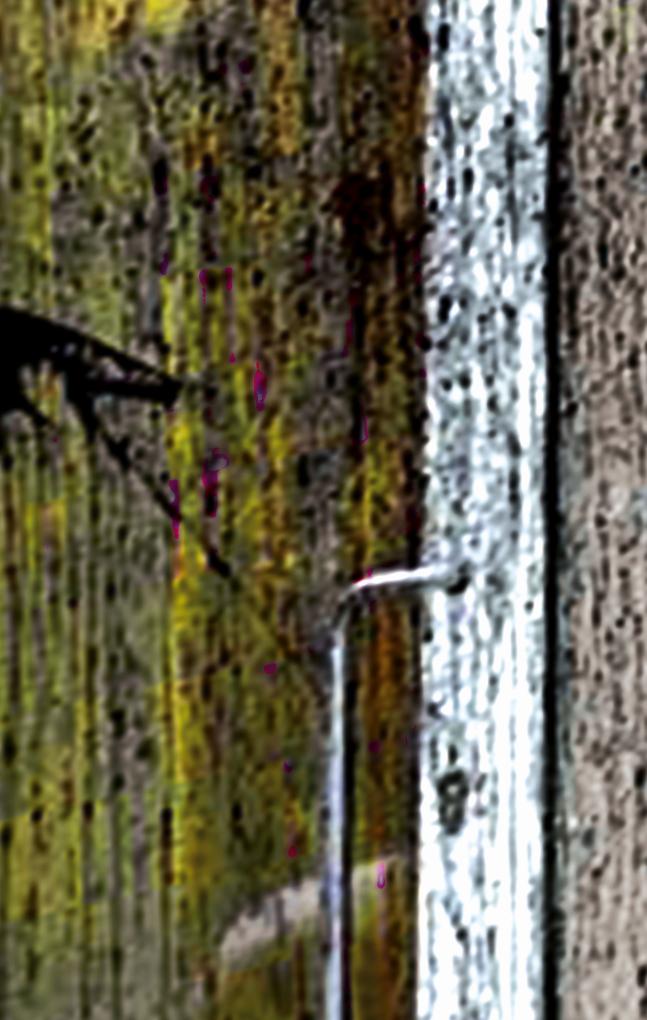 The panels of Artwall Gallery are covered by fields of colour. A closer look reveals that we are looking at painted shop windows. The paint is sprayed over what was previously displayed in the windows: brands of clothes associated with the far right and its extremist ideology. The photographs document the anti-fascist activism that symbolically removes far-right propaganda from the public space. However, the splashes of colour attacking visual messages encoded in symbols and signs addressing neo-Nazi supporters have a double effect: they obscure the advertisement but also draw attention to it.

The work was created by German artist Ulf Aminde specially for the Fotograf Festival, whose twelfth edition focuses on mapping nationalist, populist and far-right tendencies not only in Eastern Europe. The title of Ulf Aminde's exhibition – Outlet – refers to the easy accessibility of extremist ideology, which can be bought, for example, with a piece of clothing, sometimes even without realising the dangerousness of these symbols.

The anonymous photographs found on the Internet were originally taken without any aesthetic intention. Aminde, however, deliberately highlights interesting visual moments: abstract splashes of pastel colours, paint running down different materials, the head of a mannequin looking out of a shop window. The gestures of resistance are presented here as mural paintings. The presentation of activist interventions and the emphasis on their aesthetic qualities can be understood as an artistic homage to left-wing activism and collective creative practice. On the other hand it could be also interpreted as a self-reflexive commentary referring to the ambiguous relationship between aesthetics and politics.

The exhibition can also be seen as a contribution to the theme of vandalism. While the sale of brands promoting extremist ideologies goes mostly unnoticed, graffiti is (with a few exceptions) punishable by law. Yet the social impact of both is incomparable. "We understand Ulf Aminde's exhibition as a call for active resistance against far-right ideology," comment the curators Lenka Kukurová and Zuzana Štefková.

Ulf Aminde is a German artist and filmmaker. His works often negotiate public space and are also shown there, too. Many of them deal with or directly initiate collaborations and collective learning environments. In his cinematic work he negotiates the potential of self-empowerment through camera, he explores alienating effects in the documentary format, and strategies of subjectivation. His films are mostly characterized by collaborations with their protagonists as well as their experimental settings. His more recent works deal with memory and resistance. In Cologne, he is developing a cinematic and, through the use of augmented reality, participatory memorial to the racist attacks by the Nationalist Socialist Underground terrorist network. In 2020, he realized the first transnational monument for migration, Street of Labour – Monument of Migration, with the author and curator Manuel Gogos and writer Svenja Leiber. At the Kunsthochschule Berlin-Weißensee, he initiated the *foundationClass for artists and designers who have had to flee their home countries and are affected by racism. The resulting foundationClass*collective is part of documenta fifteen.